Exactly a year ago today, I put up the first article on Games from Within. It was a review of Tom DeMarco’s book Slack. I thought it would make for a nice, symmetrical bookend to wrap the year up with a review for another book by DeMarco: Waltzing with Bears.

As the subtitle indicates, Waltzing with Bears deals with managing risk in software development projects. Managing risk, not reducing risk, or removing risk. Do you think that low risk or even no risk is a good thing? Think again. One of the central points of the book is that a project with no risk is not worth doing. Yes, you read that correctly. Intrigued? Go and read the book right now. 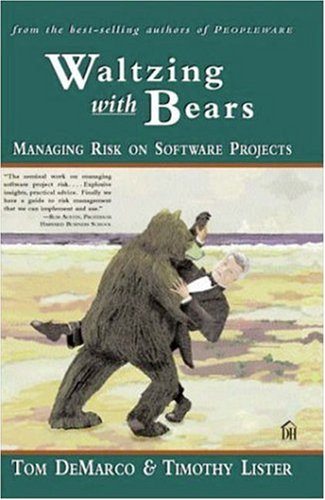 I have to admit that the idea caught me by surprise as well. Maybe because I was used to the high-risk environment of game development, I always thought the best thing you could do for a project was to minimize the risk. But, as the authors point out, a project with no risk is not worth doing. It’s not going to enrich you in any way, and anybody can do it anyway. Their point is that risk and benefits are tied together. A project with a certain amount of risk will come with a certain amount of benefits.

Now that I’ve gotten quite a bit into playing poker, I see it very much like the analysis of expectation in poker. You want to bet when there’s a positive expected value, that is, when the potential benefits you’ll get from the bet outweigh the potential loss of money. As with poker, you can choose little risk and little benefit situations, or you can aim for high risk but huge potential payoffs (especially in no-limit poker). What you want to avoid are dead-end situations with high risk and very little payoff.

In particular, the authors single out death march projects as being of extremely low value.

On a death march, unflinching sacrifice from each and every project member is absolutely required. The project demands abandonment of personal life, tons of overtime, Saturdays and Sundays in the office, estrangement from family, and so on. Nothing less than total dedication to the project can be accepted.

Sounds strangely familiar, doesn’t it? The book then goes on to say:

In our experience, the one common characteristic among death-march projects is low expected value. They are projects aimed at putting out products of monumental insignificance. The only real justification for the death march is that with value so minuscule, doing the project at normal cost would clearly result in costs that are greater than benefits. Only with heroic effort can one hope to make the pig fly.

Next time you’re deep into your third 60+ hour week in a row, think about those statements again and try to look at the big picture of your project in a new light. That just adds more fuel to the fire to my arguments against extended overtime and death march projects in general.

There are some things you need to watch out for if you’re going to start directly managing risk in your organization. The biggest problem you might encounter is that to manage risk you need to be brutally honest about the current situation of the project and possible negative outcomes. In a company where risk management is not a usual activity, it may come across as being overly negative, and you might scare away developers or even upper management. It can be particularly dangerous to do in a company with a very macho, â€œcan-doâ€ attitude (also described in the book as testosterone-based decision making), which is unfortunately all too familiar in the games industry.

One of the tools used throughout the book to describe projects and risks is probability curves. This emphasizes how things are not black and white. You don’t necessarily answer the question â€œwhen is the project going to be completed?â€ with a firm date, but with a probability curve. Looking at it tells you how likely the project is of being completed by a particular date (assuming the analysis was done correctly). The more â€œnoiseâ€ and uncertainty there is in the project, the wider the curve is going to be. Unfortunately, it seems that it’s describing the games industry to a T again, because we tend to have a lot of uncertainty in our projects with moving technology targets and a somewhat whimsical market.

Another very interesting observation brought up in Waltzing with Bears is the concept of â€œearly delivery.â€ Of all the games you worked on, how many of them were delivered early? Yeah, that’s what I figured. Same thing with me. Not a single one. Early delivery is seen as somewhat of a taboo. As if you didn’t work hard enough or you could have done a better job otherwise. So clearly, companies will never deliver a project earlier than the commit date. At best, they’ll do it by the exact deadline. At worst, the project will slip. As long as the two only possible outcomes are â€œon timeâ€ or â€œlate,â€ then projects are very likely to keep being late. That’s some food for thought.

Later in the book, in the chapter about risk mitigation strategies, the authors make one very astute observation that I’ve seen repeated over and over in the projects I’ve worked on: projects that finish late are almost always projects that started too late. Truer words were never spoken. There are often very good reasons why a project can’t get started when it should (helping out another project, lack of funding, etc), but those weeks or months lost early on would be precious towards the end.

Perhaps it’s because I have a hopeless breadth-first personality, but I hate when books try to cover every single insignificant detail from the very beginning before giving you the big picture. I would much rather get a couple of passes, each building on what I learned in the previous one. That’s exactly what Waltzing with Bears does, with the first 50 pages dealing with an introduction and motivation to risk management, and the remaining 140 pages covering the same material in more depth and giving it a more advanced treatment. More books should learn from that organization.

Just go ahead and read the book and then pass it on to your manager. It’s short and well worth the read. The important thing is that somebody in your project should be actively managing risk and balancing how much risk you take versus what the potential benefits will be. Otherwise you might run into some very ugly situations that might lead to the cancellation of the project itself.

May 2005 be everything you hope for, and may your projects be managed wisely, with just the right amount of risk. Happy holidays to everybody!